On September 24, the state agency team released a draft Coastal Access Program for providing public access at Hollister Ranch. The team which is comprised of senior staff representing the Coastal Commission, State Coastal Conservancy, State Lands Commission, and the Department of Parks and Recreation, completed an extensive public outreach program and a resource inventory that is the basis for the draft public access program.

California’s iconic coast is home to many of California’s precious natural, cultural, and historic resources. The public policy of protecting, expanding, enhancing, and promoting public access to the State’s coast, tidelands, and waterways is embodied in California’s Constitution, numerous laws, and the common law. California is a world leader in protecting its coast and advancing the right of all people to access and enjoy our beaches and ocean.

In 1981, the California Coastal Commission adopted an initial Hollister Ranch Public Access Program, which was updated a year later. The final program called for a phased and monitored approach to opening and managing access to the Ranch. Despite numerous legislative, legal, and administrative efforts over the past few decades, there is still no public access to the 8.5 miles of coast at Hollister Ranch.

Below are slides that accompanied a presentation by Joseph Porter and Philip Schlatter at the April 2019 Commission meeting. The presentation highlights some of the fabulous survey and drone work our staff performed in late 2018 and early 2019. The presentations include information about the mean high tide line, drone imagery, and some of the products generated with Drone2Map photogrammetry software. Videos of drone flights and generated 3D Models are available through the Commission’s YouTube account and are at the bottom of this page. 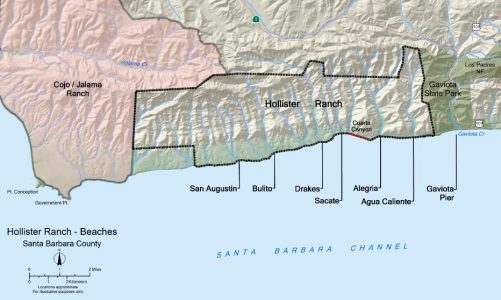 The beaches of Hollister Ranch on the Santa Barbara Channel

Answers to frequently asked questions about Hollister Ranch can be found below in both English and Spanish.

In 2019, the Coastal Commission began the task of updating the Hollister Ranch Public Access Program. We invite you to read the original plan and send your suggestions and ideas for how it could be improved.