Commission staff contributes to state and regional efforts to prepare and adapt to sea-level rise. Staff is a member of several interagency workgroups and initiatives, including the Coastal and Ocean Resources Working Group for the Climate Action Team, the State Coastal Leadership Group on Sea-Level Rise, and the California Collaborative on Coastal Resilience. Staff also serves on the San Francisco Bay Conservation and Development Commission (BCDC) and contributes to BCDC’s efforts to develop strategies to address regional sea-level rise and improve preparedness.

Resources for analysis and evaluation of impacts related to sea-level rise.

Memorandum of Understanding between the State Lands Commission & the Coastal Commission

The Commission and the California Coastal Commission have a new memorandum of understanding to improve coordination and collaboration. This collaboration is especially important at a time when California is leading efforts to curb climate change and adapt to sea level...

The Commission has released its own Sea-Level Rise Viewer

The Commission has released its own Sea-Level Rise Viewer, an interactive web mapping application to assist users with understanding the risks and impacts to Public Trust lands and resources. The viewer contains data about the Commission’s leases, coastal county and... 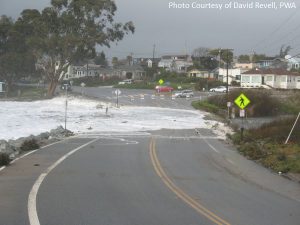 Climate models indicate that sea-level could rise by nearly 66 inches (167 cm) by the end of this century, exacerbating the effects of existing natural hazards, including storms and high tides. California’s coastline will change as sea-levels rise, which will have many consequences for sovereign public trust lands, resources, and assets, and may lead to significant environmental, social, and economic impacts.

Vast state-owned lands and resources under the Commission’s jurisdiction will be affected by rising sea-levels. While some of these lands remain in a natural state, significant portions have been developed pursuant to leases issued by the Commission or through legislative grants to local jurisdictions. Future sea-level rise is expected to compound the effects of natural hazards on existing critical coastal and bay infrastructure, and may affect the boundaries between sovereign public trust lands and privately owned uplands, which may reduce or eliminate public access along the coast.